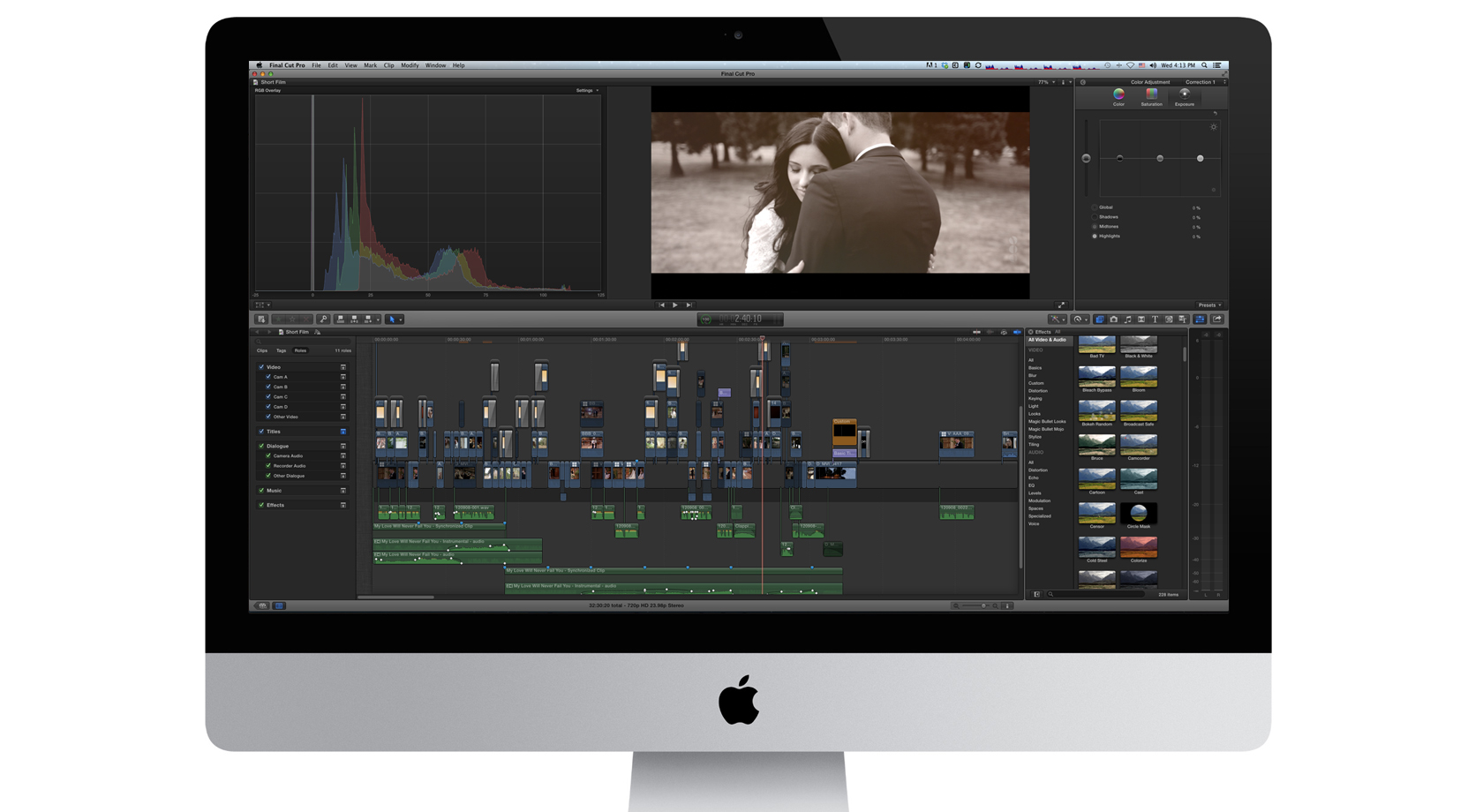 I wanted to answer questions that I have received from many of my videographer friends and peers in the wedding cinematography industry. Is Final Cut Pro X ready for Wedding Videographers? Is FCP X a good NLE for Wedding Videos? FCPX vs Adobe Premiere (CC and CS6) and so on.

Our company has made the move in June 2012 from Final Cut 7 to Adobe Premier CS6 in hopes that it will speed up our editing processes, allowing us to spend more time creating stories and of course being satisfied editing in the new NLE. We chose Adobe Premier CS6 over FCP X as we knew it was not ready for prime time (FCP X was in 10.o.3 at that time I believe).

Editing a few weddings on Premier CS6, we realized that it was too small of a step from Final Cut Pro 7 to really consider it a smart move from FCP 7. Yes, it was a better program, but the jump really wasn’t that revolutionary. The question I always asked myself: Is it worth to change a whole editing workflow simply for a few new features? We spent a few days converting to Premier and learning the program (which was not too hard to learn at all). But editing with Premier CS6, we were wishing we were still editing on FCP 7. Honestly, we didn’t fall in love editing in Adobe Premier CS6. To answer my initial question, I didn’t think it was worth switching.

Slowly, I started peeking at Apple’s Final Cut Pro X and started to like where the application was going. It was version 10.0.6 and I realized that it was ready for prime time. I saw that this application was truly revolutionary and that it had a vision for the future. I see most NLEs heading this direction one day, and FCP X has a head start.

So I brought up the idea of switching to my team. To my surprise, everyone was down for it. I honestly wanted them to turn the idea down, as I was really afraid of the magnetic timeline, but they all persuaded me. Sometimes fully rethinking a workflow from ground up allows you to create a new revolutionary workflow that is a lot more efficient and productive than the “legacy” workflow that we have been used to working with for so long. This is exactly the process that has been happening at our studio. Our editing workflow has changed after switching to FCP X and we have adapted to new ways of doing things. So far, it has greatly impacted us in a positive direction. Our films are turning out more polished, we are finishing edits a lot faster, and we love the NLE that we are editing in.

However, FCP X is not a perfect application. There are some really great revolutionary features in it, but there are also some limitations and down falls. One thing to keep in mind though, FCP X is a real NLE and is truly competition to other NLEs.

I am a wedding filmmaker and I created a list of features I love about FCP X and things that I’d love to see changed in FCP X. Again, this is from the perspective of a humble wedding cinematographer. I hope that this list of strengths and weaknesses of FCPX helps YOU figure out what you want to do.

This list is not in any specific order. I spent a few days editing and adding to the list before publishing it.

What I love about Final Cut Pro X:

Chapters are available in Quicktime Player. Clicking on the chapter will allow you to jump to that time in the film. 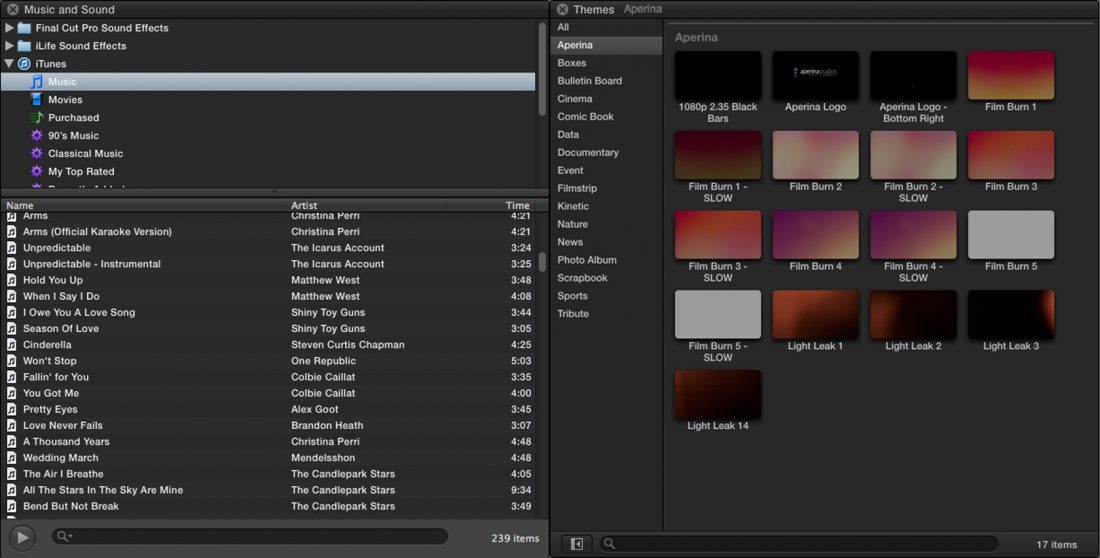 L: iTunes integration loads my iTunes library    R: Custom generators that I have created to speed up my workflow.

What Apple should improve based on my experience:

What some people may find controversial:

Many of the awesome features in FCP X are really awesome in my opinion. Many of the downfalls are actually just me wanting something specific from an editing application. Some may think that my “downfalls list of FXP X” is longer than the “greatnesses of FCP X.” (take a look at the crossed out sections though – there is a lot crossed out by 2017) Yes, I agree, but that is because most people comment on negative things a lot, and forget the aspects that work flawlessly. I think same goes with me. Many features in FCP X are flawless and perfect, but I do not notice them because they do the job exactly how I want them to.

I like Premier in some areas, but overall I really don’t like it. I have installed a legal version of Adobe CS6 (Creative Cloud) on a fully tweaked out late 2012 27″ iMac. Premier just does not work that well on a monster machine.

First of all, it’s a buggy program. It crashes like crazy. In a day, it would crash between 5 to 15 times. Some times it auto recovers the project (which I love), but many times, it doesn’t. The recovery process takes long. The Application shuts down very long after a crash. It’s stays “not responding” for a really long time forcing me to quit it.

Second of all, I don’t see the speed difference between FCP 7 and Premier CS6 with a GPU accelerated card. On paper it’s faster, but in real life, it’s buggy and slow. You end up doing your project slower than even in FCP 7. Yes, it reads DSLR footage without having to convert the footage first, but so can FCP X.

Lastly, my edits with Premier CS6 are not better. All the features in Premier CS6 are regular features. Dull and boring – but they work exactly how they did for a really long time. Nothing revolutionary. FCP X, on the other hand, actually has features that make your audio/video quality a level up and and takes you to a new revolutionary and faster workflow. I mean it. Faster workflow.

Hands down, I would choose FCP X with just these three reasons listed on the Premier CS6’s “downfalls list.”

With that said, FCP X’s “downfall list” may be long, but my edits are done fast and they are better quality edits. In premier CS6, my edits are not better (they are the same) and the edit is finished at exactly same speed as it was in FCP 7 (if not slower because of all the bugs). (FCPX 10.1 fixed a few issues with it’s release.)

For me, it matters at the very end. Was I satisfied? I was satisfied with FCP 7. And now, I’m in love with Final Cut Pro X!

Deep in my heart, I see a bigger revolutionary future for Final Cut Pro X than Premier CS6.

This is why I chose Final Cut Pro X over Adobe Premier CS6 for my wedding videography work.

(Leave you comments below – I’m sure we will have an interesting debate.)

UPDATE 10/23/2017: I still am using FCPX 10.3.4 and loving it. I recently tried Adobe Premiere cc 2018 and excited for some of it’s features. However, I will be sticking to FCPX for weddings. Also excited for the iMac Pro and a promised FCPX update soon.