We traveled to Seattle, WA to capture this stunning wedding of David and Raychel at the Olympic Sculpture Park. What made it even more epic was that we filmed and edited a Same Day Edit that premiered at the wedding reception. It was an amazing and stressful weekend in Seattle, but we loved the challenge and captured a memory that the couple will cherish for ever.

When Raychel and David initially reached out to me, they mentioned that they wanted a Same Day Edit to play at their wedding reception. I love Same Day Edits! I understand they are quite challenging and extremely stressful, but I also know they are quite rewarding for the couple and their closest friends to watch their beautiful wedding film at the wedding reception. So of course, I agreed to this challenge.

We arrived two days early to capture some Seattle scenery, time lapses and a quick video session with the couple. Because Seattle is significant to the couple, I wanted their wedding film (the Same Day Edit) to feel that their wedding took place in this beautiful city surrounded by water. So we had a lot of work to do.

Our first stop was Alki Beach. This gave us an epic view of Seattle from across the bay. We captured a few shots there, especially of the Space Needle, and headed on. The next morning, we headed to Gas Works Park with David and Raychel and spent some filming them with their dog. Since their dog, Gary, wasn’t going to make it to the wedding, I made sure that he made it into the Same Day Edit. Gas Works Park has a beautiful view of Seattle through Lake Union. The footage we captured here of the couple and of the city was stunning. We then drove to Pike Place Market, getting a few more shots of the couple simply being “them” around each other. I love their simple nature and the love they had for one another.

Most of our second day, we spent driving around Seattle capturing time-lapses of clouds through building, the Space Needle, the Seattle Great Wheel and more city shots. I think this is where I started falling in love with the city, its modern architecture and the lush forests around it. At this time, I already started to get an idea how the Same Day Edit might start. So, we headed to our hotel, copied the first batch of cards, and I begin the editing process.

That same evening, we headed to Olympic Sculpture Park for the rehearsal. We cleared up and planned the Same Day Edit premier with the involved wedding vendors. It was definitely something that helped to make sure that the Same Day Edit would play smoothly. We also found out that it’s a complete surprise for all the wedding guests, only the bride and groom knew. Right after this, we headed to the rehearsal dinner at a nearby industrial photography studio. We captured the chill and fun atmosphere and a speech by David’s dad. That pretty much wrapped up our second day. We headed back to the hotel and got back to editing that lasted into the night.

On the wedding day, everything fell into place flawlessly creating a perfect wedding day for the couple. From the note David wrote Raychel, the first look, the ceremony in the amphitheater, the cocktail hour, the reception, the first dance and to the dancing. The whole wedding day was perfect and simply gifted the bride and groom the best day of their life.

For us, the wedding day was quite complicated. We had to balance filming and editing. Most importantly, we knew we had to have a film ready to show at 10:30pm, only a mere 4.5 hours after the beginning of the ceremony. On top of including the ceremony in the Same Day Edit, we also planned to include the couples Grand Entrance, their First Dance and even dancing. And if that was not enough, David presented us a crazy idea to finish the Same Day Edit with a LIVE shot of him and Raychel between all their friends in the middle of the dance floor creating a very interesting end for the guests (who were very surprised to see a live shot). This was a simple cool idea, but extremely complicated on a technical level.

So, how did we do it all? It’s pretty intricate but at the same time quite simple.

I collected memory cards from all the cameras though-out the day, multiple times, gathering footage as it was being filmed. Editing in FCPX on my iMac Pro, I’d diligently sort through the footage choosing my favorite shots and putting them on the timeline. Many times, I’d take over a camera and have my assistants color grade and perfect small aspects of the film while I captured important moments (like the first dance, for example). I probably over simplified it here, but it definitely required a lot of running and feeling sick in the stomach. However, because of the strong team we had for the wedding, it gave us the power to be able to include footage in the Same Day Edit that literally just happened a moment before. And to put the cherry on top, we flawlessly cut to a live shot at the end of the Same Day Edit of both David and Raychel giving each other a kiss in the middle of the dance floor.

The cheering, the laughter and the awestruck crowd — all made this worth it. All this organized chaos definitely amazed the wedding guests, the family, and most importantly, the bride and groom. For me, this is a humbling and rewarding experience.

Let us capture your wedding. Learn more about our Wedding Cinematography? 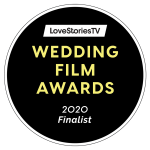 PS. We were honored that this film was nominated for “2020 Wedding Film Awards” on LoveStoriesTV. We’re super stoked about this nomination! It was nominated in the “Film of the Year” category, so this is also exciting!

We are an Award Winning Wedding Cinematography company that creates beautiful, emotional and romantic Cinematic Films and Same Day Edits that tell your wedding story.