Every love story starts with a unique beginning. Whether it is an accidental meeting or a forced blind date, the beginning marks the start of how two people fall in love. In this case, after a busy work week and another late night ahead, Sahil wasn’t too eager about going to a wine tasting on December 6, 2014 but his friend gave him the extra push he needed to leave his house that morning. Little did he know, that was the magical day all the stars aligned and Sahil laid eyes on Natasha for the first time. After that night, he confessed to his friend that he couldn’t stop thinking about her. As their love story continued, the two faced many dragons and a few painfully awkward early dates but Sahil and Natasha kept fighting for their love until 1301 days later, they tied the knot and started their new beginning together as husband and wife.

Enjoy this South Asian Wedding of Sahil and Natasha at the largest Sikh Temple in America, the San Jose Gurdwara Sahib. 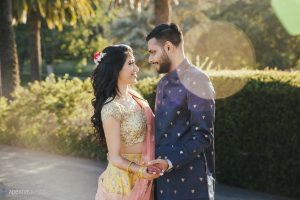 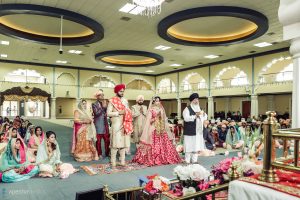 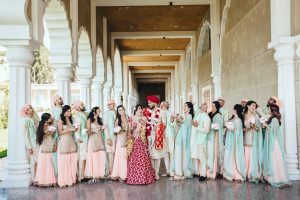 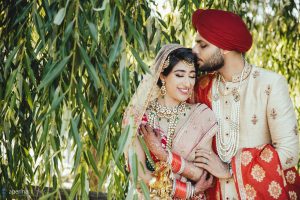 Natasha and Sahil’s 5-day Sikh wedding celebration in San Jose was filled with cultural traditions, emotional speeches, and fun dancing that were all so exciting to film. It started with a day of henna artwork, which is always so cool to film as the talented mehndi artist, Neeta Sharma from MehndiDesigner, works her way up the bride’s arms and hands in mesmerizing patterns. This time, I tried out a time lapse approach and it worked out really well.

The following day, all the guests joined in the Sangeet at Castlewood Country Club, which was full of laughter, dancing, and also included a skit about the couple’s love story. Family and friends were eager to share inside jokes and long forgotten memories about the couple.

On the third day, we filmed as the bride’s face was covered in Haldi, a yellow turmeric paste. We were able to really get some amazing and closeup shots that gave that sequence in the final edit a very graceful and traditional look. These are some of my favorite shots from the whole film.

The next day, the fourth day, was finally the wedding ceremony. Sahil and Natasha’s wedding took place at the largest Sikh temple in America – San Jose Gurdwara Sahib Temple. All the previous events were leading up to that day and all the details were finely coordinated to commemorate the Anand Karaj. The groom launched off the ceremony when he arrived on a white horse for that baraat. The tone of the wedding shifted to more serious as the couple partook in the Anand Karaj. Even the architecture of the San Jose Gurdwara enhanced the cultural feel of the wedding day. It provided a surreal backdrop to all the cultural details of the ceremony, which me and my Indian wedding videography team was able to closely film as they occurred. In addition, we were able to film the beautiful overview of this famous temple with our DJI Inspire 1 drone, giving this wedding film an epic bird’s eye view of the wedding scenery.

After the ceremony, we were able to sneak away with the couple to the side of the Gurdwara and film some creative shots between the famous white pillars of the temple. Working alongside the photographer, Paul, who is my brother and also part of our team, allows us to work together more in sync and smoothly. Together, we have established a finer rhythm as we know which angle we can maximize, while openly collaborating to attain more creative shots. After our quick 15 minute photo and video shoot, we headed down to the front of the temple for the emotion-packed vidaai. This moment is symbolically marked by a heartfelt goodbye as the bride leaves her family to join the groom, and they drive off together.

And finally, the last day was the grand reception of the wedding at the San Jose Fairmont. The San Jose Fairmont is an elegant and gorgeous wedding venue that is simply stunning (to say the least) to have a South Asian wedding like this at. To add to that, the beautifully designed decorations, by Norma from Norma’s Flower Shop, and day-of coordination, by Minoti Mehta from Vermilion Weddings presented an unforgettable celebration. From the grand entrance, to the couple’s first dance and finally to the crazy Indian dancing, the reception program was such a thrill to film. During the reception, the groomsmen performed a choreographed dance for the guests, and out of nowhere the groom tore off his jacket and joined the dancers in his suspenders and “silly dance moves,” firing up the crowd. Toward the end, the groom jumped up to Natasha and pulled her to the middle of the dance floor, officially kicking off the dancing for the night. It was evident that the wedding guests enjoyed themselves as they danced the night away.

As with all of my wedding films, I wanted this Indian wedding film to be perfect. I started editing this short film a few months ago and after overcoming many obstacles, I’m finally happy (but as always, nervous) to share it with the couple, their family and the world.

This film in particular challenged me as an editor. It had so many different paths I could have taken it on in terms of editing, but many paths that I attempted, they felt off.

My process is usually to start building a rough “skeleton” in Final Cut Pro X. I first focus on picking out the most important content from all speeches and/or “talking” that happened at the wedding events. Yep, seriously, I literally focus on only things that were spoken first. This allows me to get an idea of the emotion and story of the wedding. This is actually a simple process, but extremely time consuming and takes a lot of my brain power.

After this, I start writing down the most important content that I think should have “focused” moments in the film (like the ceremony grand entrance, for example). This allows me to understand how the wedding played out and what kind of music I should be looking for.

Once getting an idea for the emotions and the story, I go searching for a compatible (but mostly epic) song on MusicBed. For this South Asian wedding, I was looking for a few soundtracks to illuminate the emotions expressed during the various sentimental speeches. I needed a soundtrack that would give the bride a chance to relive those emotions she felt when entering the room full of all the guests, admiring every inch of her beauty. Such soundtracks take time to find and I listened through numerous tracks (probably 150 or so), downloading only the ones I find to be perfect (there were about 10 soundtracks downloaded in total).

This is where it starts getting really hard. I try to pinpoint a “storyline” of how I will edit the speeches, the main events and also the smallest details of the wedding celebrations on the timeline using the music as the driving factor. This is why choosing the correct music for the film is important. I will even start adding placeholder layer for key moments. And with time, more placeholders will be placed on the timeline, and even more will soon be replaced with actual footage from the wedding.

For this wedding, I had to go through four very different versions. I started editing one version, but it just didn’t click all too well for me. So instead of forcing it, I pushed pause on my work and I put the video on hold until I found a “better” way to tell the story.

Just to give you an idea of what I deal with, I have uploaded one of the previous versions I began for this film but eventually gave up on because it wasn’t flowing in a direction I was happy with. You can see that this version was drastically different from the final one and for me, it wasn’t fitting for this particular wedding and the story I wanted the film to tell.

This video is the raw, not color corrected version 2 of the film that I decided not to proceed with.

As an Indian Wedding Cinematographer, I strive to capture the essence of all the speeches and overall sentiment of the Indian wedding to better retell the story. If the ‘skeleton’ of the film doesn’t feel right, I have no problem tossing it, or actually pausing it, and starting a new version, with a fresh perspective (sometimes a week or two later). Interestingly enough, for this film, version number four was not the one we went with for the final product. After talking with my brothers who were also part of the cinematography team on the wedding, we all agreed that the ending of version three was much more organic and the music transitioned more smoothly throughout the different shots. So, I switched back to the third version and that became my master edit.

Below, is a full resolution screen capture of my final product. You will be able to clearly see the skeleton that is initially created for the film. I wonder how easy it is to tell from the perspective of a regular person (and not a wedding videographer). Can you see the skeleton? 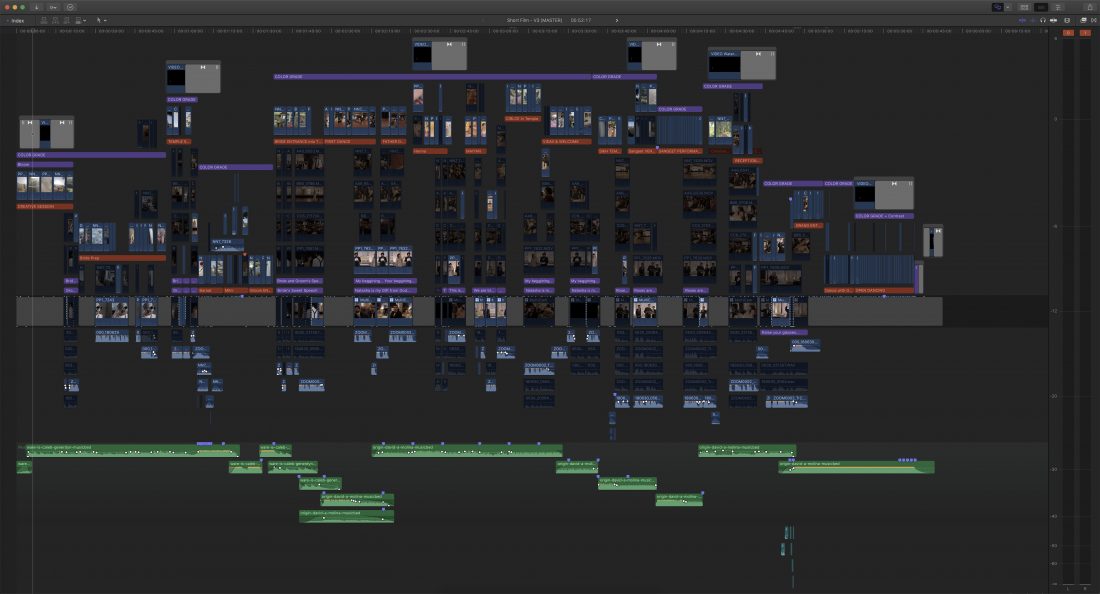 Let me know what you think below in the comments about Sahil and Natasha’s Cinematic Indian Wedding Film. 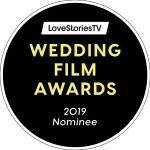 PS. We were honored that this film was nominated for “2019 Wedding Film Awards” on LoveStoriesTV. We’re super stoked about this nomination! It was nominated in the “most creative use of cinematography” category, so this is also exciting!

We are a South Asian Wedding Cinematography company that captures epic, romantic and cinematic Wedding Films that tell your wedding story.

How To Master The Art Of Wedding Photography.