15 Aug MUSIC VIDEO and a Party on a Sail Boat in St. Lucia – Destination Wedding

I was very lucky to experience a unique weekend in St. Lucia and be part of Barron and Dana’s destination wedding at Royalton St. Lucia. Their wedding was amazing and simply beautiful. After filming their wedding, the couple wanted me to film something very fascinating (for me at least) the next day, a music video on a sail boat set to a new song released by John Legend – A Good Night. They wanted a video that simply shows them and their wedding guests having fun on a boat in the middle of the St. Lucia ocean and so it would look like a music video.

Filming the music video was a challenge – it really was. I actually almost lost my DJI drone as the winds over the ocean were way to strong for my tiny drone (but that’s another story). The little time we had to shoot during sunset and the few times we played the song, really made it hard to capture all the shots. Somehow, we pulled it off.  This is definitely something different than we usually produce, but I’m happy how this challenging music video from their party on the sail boat turned out. Enjoy this video!

I’m excited to be sharing their destination wedding film soon. I’m 100% confident that it will be amazing as footage me and my brother captured are stunning. Take a look as some of these screen captures: 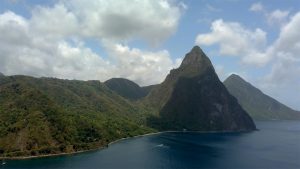 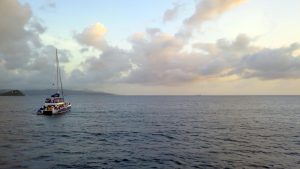 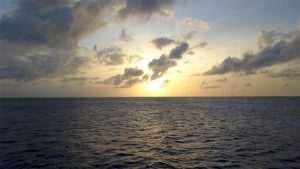 Are you looking for a Destination Wedding Cinematographer?

P.S. I do want to take this opportunity to thank the Carnival Sailing captain who directly played a role to making sure that the drone footage we have for this music video, actually made it back to me. Little story here: the drone was having a hard time keeping up with the sail boat as the winds picked up right around sunset. The boat captain turned his boat around and sailed toward my drone, allowing me to land in the boat, thus completely saving it. Thank you.